Sometimes an idea for a post pops into my head. If the notion pays the rent and takes up residence, I feel compelled to write it out.

I have noticed for months that there is one post I wrote early in my blogging days which continues to get attention. It’s called “A letter to my ex-husband.” and it consistently receives 50-60 clicks a week. I think this is telling me that there are new “victims” every day who seek comfort and company on the internet. Hopefully, they are seeking to lose that feeling of being the victim. What I know is that most are in a great deal of emotional distress.

Then I start to wonder, “Should I revisit that post? Should I write an update?” I seldom return to old posts. It’s rather like a sixteen-year-old backtracking to read what she wrote in her diary as a twelve-year-old — naïve and poorly written.

I have just read and re-read the open letter I wrote to you back in November, 2010. I stand by what I wrote. If I were composing the same letter today I might not use the Pearl Harbor metaphor but I’m not sorry I used it then. That’s how I felt at the time. I hope my writing is somewhat improved since those days.

I’m happy to say that I no longer dwell on the difficulties of that period in our history. My life moves along with more happy times than not as I try to focus on those most important in my life — my family. I must admit, though, that I still miss your family. At the time, I felt as if I had suffered multiple amputations but those wounds have mostly healed.

I have come to realize the we have a history — you, your family and I. And I know now that it’s mine to keep. No one, no divorce, no would-be interloper can ever take that away from me. I’m free to remember the happy times, and sad, as I choose. I even have a couple of pictures of you on display in my house. There’s one of you and two cute little granddaughters, all of you wearing identical Harley Davidson t-shirts. There’s the one of you and me and H when she was baptized  in your grandmother’s christening gown. When someone who doesn’t know you sees the latter and asks me if that’s my ex, I always say, “Yes, it is. Wasn’t he a handsome fellow.”

As I was reading the old letter and starting to write this post, I remembered the disconcerting dizziness of feeling as if I were on a merry-go-round back when I first heard the infamous divorce announcement. My mind would get in a loop and I had a hard time escaping the negative and unhelpful self-conversations. I even dreamed about carousels and their eerie, hypnotic music. I would feel it slowing and think it was slow enough to step off. But, alas, I would stumble and fall in a teary puddle every time.

My son-in-law recently told me about going to a colleague’s office to discuss a work-related matter. Instead of addressing the issue at hand, she looked at him and stated, “My husband is having an affair.” He asked me why she had said that to him. They weren’t buddies or anything so why would she do that? My immediate response was, “That’s all she could think about.” In other words, she was on the merry-go-round. It takes a while to get off. I had to ask the same “What did I do wrong?” question over and over before I finally let it go as unanswerable.

You’d think one carnival ride would be metaphor enough for one in the throes of despair. Not for me. I went straight from the carousel to a giant roller coaster. And sometimes the two merged into a monstrous nightmare. 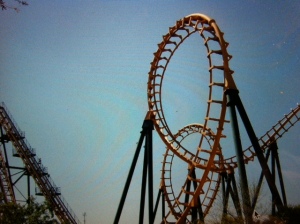 This new ride came along when I stopped asking hypothetical questions and started to figure out what I must do to take care of me. I allowed my anger at you and at my situation to spring into action.

Anger can be a wonderful resource and motivator. It enabled me to start taking care of important divorce-related issues. Things like feeding myself properly, getting enough sleep and starting to raise my consciousness about financial matters and finding the right attorney to help me with my decision-making.

During this period the roller coaster started going up fairly often and I would feel pretty good. Fear would strike and I would crash back down. In between there were loop-de-loops when I was upside down and inside out and didn’t know what I was doing. One wise person named John told me, “Some things just take time.” He was right. As I found my sense of humor again and enabled my positive attitude, I came through and am better for it. I truly hope you are too.

Life is good as I remember our happy times together.

I have nine grandchildren. Anyone who reads my blog or has ever met me knows this fact about me.

Being a grandmother is my best job yet. As each grandchild graduates from high school, I try to take him/her on a trip. Last year I took grandchild #3 to San Francisco. (I wrote about it here.) This year grandchild #4 requested the same trip. I think, initially, the attraction of the City by the Bay is its frequent presence in television programs and movies. I’m happy to report, though, that there is a great deal more depth than that in today’s youth and once they find themselves in the city, they are as captivated as I am by the history, the art, the people, et al.

Flowers, flowers
everywhere, we should have worn some in our hair.

Chinatown is a must. We went there twice. The colors, the smells, the lanterns, the people.

Some people told us not to miss Pier 39, others told us it was nothing but an amusement park. I disagree with the latter. It’s much more than that.

One of my granddaughter’s favorite things there was observing the sea lions from above.

There was one grumpy old fellow (or gal) who defended his territory with a vengeance. Fascinating to watch.

The only thing I

saw that gave the pier an amusement park feel was the carousel. We didn’t ride it but it has some imaginative and interesting animals for those who are so inclined.

I don’t know why I’m fascinated by the piano-playing stairway, but I am.

On the left is a photo of granddaughter #3 playing us a lively tune. On the right is this year’s traveler doing the same.

There’s a wonderful produce kiosk on the pier. Fresh fruits and vegetables galore.

Ranier cherries and freshly picked strawberries. Does life get any better? Yum!

Almost everyone who goes to San Francisco wants to visit the crookedest road in the country, or so they say. It’s very difficult to get a good shot of the curviness of the road with a phone camera.

I was intrigued by this fairytale-like entry to one of the houses on Lombard Street so I’m showing you that instead.

We had lunch in Sausalito–best crab cake I’ve ever eaten.

Last year we didn’t make it to Haight Ashbury. I’m happy to say we went there this trip. I, being an old hippie, enjoyed that part of the trip more than my daughter and granddaughter did.

It was (and still is) much romanticized. Truthfully, the only thing I find romantic about it is some of the architecture.

I like the painted ladies. Many of them are being well cared for now and are simply lovely to look at. I think my travel buddies enjoyed the “ladies” too. And H (age 18) loved the huge music/poster store on Haight Street.

I went “heart” seeking again this year. I wrote about the hearts last year so I won’t repeat myself. I will leave you with a photo one of my favorite this-year hearts along with two of my favorite people in the whole wide world. 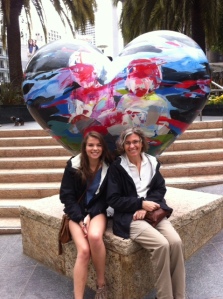