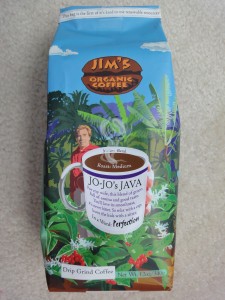 Without my morning coffee I’m just like a dried up piece of roast goat. ~ Johann Sebastian Bach, “The Coffee Cantata”

Who knew that Bach composed a coffee cantata?  I certainly didn’t.  I knew nothing of his lighter side.  The link above is in both German and English.  Some would prefer the original language.  I’ve now listened to several versions and find it funny in any language.  The message of course being that many of us are bears before we have our coffee.  (Tish, you’re going to love this music.)

Today is National Coffee Day in the US.  I bought a bag of Jim’s organic coffee in its honor.  Jim created this blend especially for his wife Jo-Jo.  It promises to be a “blend of grace, full of aroma and good taste…smooth and never bitter…Perfection”  And I gotta tell you the smell is heavenly just sitting here beside me in the bag.  I had a cup this afternoon and I agree with Jim–it is perfect.  Even the bag uses renewable sources.  Way to go, Jim!

I didn’t drink coffee until I was in my early thirties.  I was student teaching in a local high school and we had a morning planning period.  I blame my supervising teacher for what has become my caffeine addiction. 🙂  Every morning I tagged along to discuss lessons with her while she had her coffee.  It didn’t take me long to join the club.  Prior to that I had loved the smell but not the taste.  I soon understood that it wasn’t so much the taste as the “lift” one gets from the caffeine.  I found out what a great “waker-upper” it is.  Now I even like the taste, but it has to be very fresh and a really good blend/roast.

I found some great coffee comments as I was researching this day and this topic.  Jeff Bezos said, “In Seattle you haven’t had enough coffee until you can thread a sewing machine while it’s running.”  Now that’s a caffeine high.  I’ve been to Seattle a number of times and I agree that they have some outstanding coffee and they love it as much as I do, maybe more.  D and I sat in a cafe on the water in Mukilteo several times and enjoyed their wonderful coffee with breakfast.  I have also visited the very first Starbucks at Pikes Place Market in Seattle.  Can you tell I love Seattle?  And not just for their coffee.

I found a couple of good political coffee quotes, too.  Ronald Reagan said, “I never drink coffee at lunch.  I find it keeps me awake for the afternoon.”  Now that explains a great deal.  I always suspected he slept through a lot of his presidency, especially the second term.  This proves it.  And while we’re on politics–Donald W. Brown said, “There isn’t enough coffee in the U.S. to keep everyone awake during a Presidential campaign.”  If you think he’s joking just tune in one of the Republican debates and see if you don’t fall asleep on the couch.  I do.

Only one thing is certain about coffee…Wherever it is grown, sold, brewed, and consumed, there will be lively controversy, strong opinions, and good conversations. ~ Mark Pendergrast

Whether you had hot coffee or a frozen delight or both, I hope you’ve had a good National Coffee Day.  Now get some sleep.  (She says with an evil giggle.)