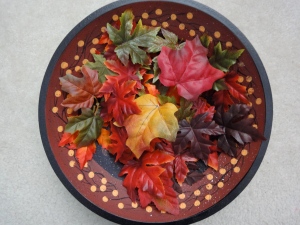 Autumn leaves. I love this time of year.

“If another woman steals your man, the best revenge is to let her keep him.”

I don’t know what wise woman said that but the farther I get from the initial shock of being divorced, the more I agree with her.  In fact I would go a step further and say that it might be the best revenge for both of them.  I’m starting to think that maybe they deserve each other.  After all, she was stupid enough to pursue a married man and he was stupid enough to cheat and lie.  I wrote a quote in my notes recently but I forgot to record where it came from.  Someone said, “A mistress will destroy a man’s life if he loves her and leaves his family, but that love starts with a fracture not a victory.” I don’t know whether that’s true but I suspect it’s pretty accurate.  In other words, their work is cut out for them.  They damaged not just themselves but the lives of many others.  They could have mitigated some of the harm to others if they had taken time to consider their actions and had tried harder to control themselves long enough to give a reasonable adjustment time to the families.

Ultimately they have to live with what they’ve done.  D has always thought of himself as a free bird and “not the marrying type” (his words).  And now he has more chains on than he’s ever had before.  Meanwhile I’m the free bird.  Life is strange indeed.

12 thoughts on ““If another woman steals your husband…””